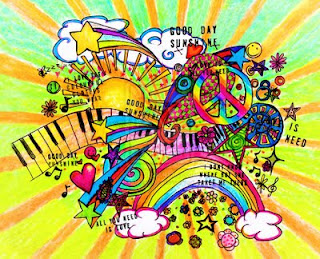 The Beatles' song came to mind as I looked out the window this morning....sunshine, no clouds...looks like it's going to be a beautiful day.  There are lots of things on my "to do" for these four days off...outdoor cleanup, digging, planting, and indoor painting, purging, and upholstering.

On another note, and something I'm more inclined to do...I found this online while looking for something else (isn't that always the way??)... 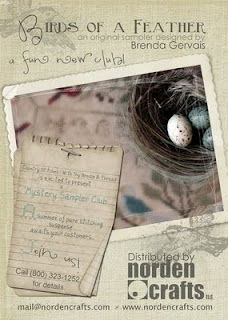 It's a mystery stitchery by Brenda Gervais.  If you don't have a local needlework shop, just Google "Birds of A Feather" my﻿stery stitchery.  You'll find lots of online shops offering this project.  I've been feeling the urge to stitch lately...along with the urge to piece a quilt top.  My friend Michelle (MadRedHare) is doing a block of the month feature on her blog, and I've made two of the four blocks assigned.  She just sent out the next two blocks, so I hope to work on those sometime this weekend.  Just before the first of the year, I decided that I wanted to do an embroidery project...a square a day, just like the projects I've read about on OPB's (other people's blogs).  By the end of January, I had my cloth ready...one inch squares drawn 19 x 19 with four squares at the top for the year.  365 blocks.  By the end of February, I had stitched around the borders of maybe 1/3 of the blocks.  I pick it up in spurts, and I'm hoping that by the end of May I'll have all 365 blocks outlined.  My stitch-a-day plan hasn't worked out so far, but there's no reason (like I have concrete "rules" about much of anything?) I can't run my year from June to June. Sounds like a plan...
Better get to work!

Oh I keep wanting to do that inchies project, too. It looks like something I might be able to handle.