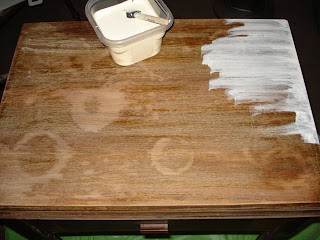 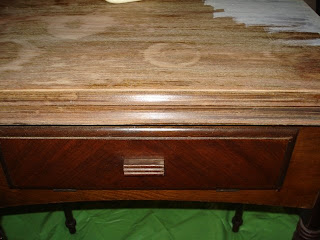 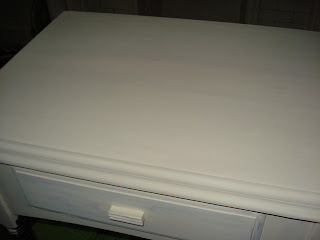 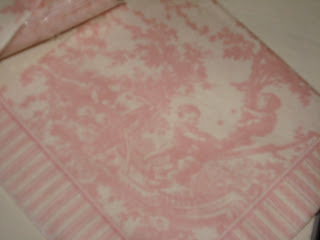 To do:
* Cover dress form with mocha brown burlap. (Save for another day)
* (done) Finish painting old sewing machine cabinet. This little project came out of left field. The cabinet and 1950 Singer AM-20 (heavy as heck) have been sitting out on the sun porch for 4 years, something I picked up from Evansville Freecycle. Every time we have a heavy trash pickup, I think of putting it out. This morning I decided to see if I could fix the machine. Thank goodness before I put too much time into it, I discovered a big wiring problem. I removed the machine from the cabinet and have it ready to put out for regular trash. I asked my daughter if she wanted the cabinet...it has a pretty awful finish...you know, someone had put an iron down on the surface, assorted water rings, etc. I thought I'd sand the veneer some and see if it could be salvaged. It seemed to work, so I have two coats of Martha Stewart White Linen painted on the top. The piece could turn into a night stand, a little desk of sorts, or who knows...a sewing machine cabinet! Also a possibility...I found some pink toile paper napkins several months ago (for this Christmas project) at Tuesday Morning. I'm thinking of putting some of the toile in the corners of the table top. Hmmmm. Also...need to paste wax after the table top decision is made.
*Put wood putty on the broken veneer surfaces of yet another old (treadle base) sewing machine cabinet...or totally chip the veneer off. This is the one I want to mosaic with broken pieces of blue Bennington pottery. (Actually just moved this heavy piece from where it was and put it in the middle of the kitchen. Don't want to walk around it too much...but it's ready to work on.)
* Paint lazy Susan. (done--the black paint; need to decoupage later in the week) I got this idea from the new Somerset Home. I've had a wooden lazy Susan for ages...it's 'country blue' with geese painted on it...a Christmas gift from an ex-sister-in-law from over 20 years ago. It's been hidden in a cupboard for most of its life because it's so darn ugly. I'm going to streamline it with black paint and a little decoupage.

Notice the word "paint" liberally scattered throughout this post? I hate to paint, but I love looking at things in new ways. I've also been throwing the "decoupage" word around a lot lately...I've always had Mod Podge on hand, but I don't recall every using it for anything. Sounds like it's about time!
at August 11, 2008

Email ThisBlogThis!Share to TwitterShare to FacebookShare to Pinterest
Labels: projects

Such a great rescue! Looks marvelous...wonder if you'll actually decide to embellish with the toile. Hope that you'll show us the rest!

Your to-do list looks like mine! Amazing what a can of white paint can do isn't it? The cabinet looks so much better:>)

I love reading others' TO-DO lists...especially since mine is SO HUGE!!! It makes me feel better, in a wierd sort of way, knowing others have big lists, too!

Go for it! Mod Podge rocks my world.

Those green orbs are pretty cool, something we don't have here. Are they the same as Osage Oranges? ( which we don't have, but I have heard of). Let us see the lazy susan when you are done. I would like to get some decoupage ideas; I haven't done any for years and the Mod Podge has dried up, lol!

Awesome job! I came across your blog...Love the to do list! I need one! Really bad! :) Screaming Meme