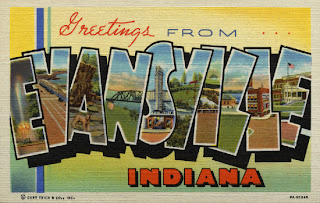 Super Tuesday...politics, Mardi Gras, and 70 degree temperatures in February. It looks like this Tuesday will be a repeat of last week...only this week we're at a "moderate" risk of serious damaging storms instead of "slight" like last week. Hmmm...there are still big tree parts on the ground from last week's storm. It's my night to work, so I will just assume I will be spending time in the stairwells again. I always have loads of entertaining items packed in my tote bag...IPod, a book, a magazine, notecards, and whenever there's a "weather event" in the offing, I throw in a little Casio LED battery operated television...it's small and keeps us informed of what is going on out there. I'd rather listen to a local broadcaster than the mechanical voice of the weather radio guys. So far today we've had 2-3 inches of rain...flash flood warnings have been issued...Super Storm Tuesday.

As those weather guys say, "Be safe."

Can't even imagine what it would be like to hang out in a stairwell at work for safety reasons. Just goes to show how different parts of the country experience weather.

I sure hope that you don't have bad weather. I don't think it is fair to have to "pay" for high temps with threats o severe weather. Stay safe and stay entertained. You are certainly prepared.