One month and one week until Spring 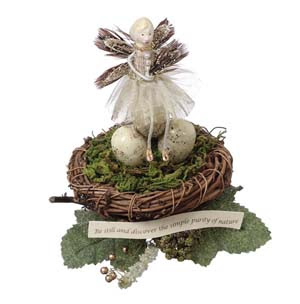 A three-day weekend looms ahead of me...a little perk for working last Sunday. No real plans other than dinner with friends this evening, "nest creation" for a swap I'm in, and more papier mache moulding. Housecleaning...for sure. I've really neglected the dusting and vacuuming part of housecleaning lately; I need to get that out of the way this morning so it doesn't become one of those things I meant to do but didn't. It seems like in the past 5 years or so, I've become able to overlook the messes and see only what I want to see...a good thing if everyone who enters your home comes equipped with the same blinders, but not so good in reality.
Lots of LOST comments yesterday...I just started watching it a year ago, via DVDs. I think I ended up watching 5 or 6 episodes at a time in order to catch up with the new season last year. Some episodes were really good, others were just plain confusing. I really like what they're doing this year...showing an enhanced (think "pop-up video" from years ago) episode from the previous week with little hints and clues written across the screen. I will definitely be watching next week's enhanced episode so I can try to figure out what went on last night. Those writers are amazing!

Enjoy your long weekend...I know that it'll be a good one!

Hi Teresa!
Enjoy your long weekend! Love the 'nest'.. so pretty and perfect for the season!
♥ Abbie