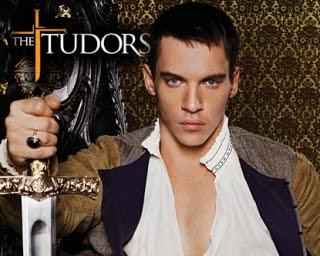 In anticipation of the "arctic blast" that is supposed to hit us this evening, I have a warming evening planned...kinda chick-flicky, but it will definitely take our minds off the cold outside! I've been raving about The Tudors since I watched it OnDemand early in the fall. While the history of it is a bit skewed, and Henry the VIII is a hottie instead of a bloated, syphilitic old monarch, it is a blast to watch. A friend from work is coming over to watch the first few episodes (again OnDemand...leading up to the new season beginning at the end of March on Showtime). I made another beef burgundy this morning, along with defrosting a loaf of Rhodes bread dough...the beverage for this very cold night...Glogg...from The Ski House Cookbook by Tina Anderson and Sarah Pinneo. Here's the recipe...
Glogg
1 1/2 cups vodka
10 cloves
10 cardamom pods
2 (3 inch) cinnamon sticks
1 (2 inch) piece fresh ginger, peeled
Zest of 1 orange
1 (750 ml) bottle inexpensive red wine
1/2 cup sugar
1. Combine the vodka, cloves, cardamom, cinnamon sticks, ginger, and orange zest in a small bowl. Set aside for at least 1 hour, or covered for up to one week.
2. Combine the wine and sugar in a large saucepan. Bring to a boil, reduce the heat, and simmer until the sugar is dissolved. Add the vodka mixture, return to a simmer.
3. Strain and serve warm.
at January 18, 2008

Email ThisBlogThis!Share to TwitterShare to FacebookShare to Pinterest
Labels: beverage recipe, The Tudors

Hey, I was going to bouef bourgignonne for my party tonight, but opted for chicken tetrazzini because it is So much cheaper an easier.

PS. Spellcheck is having a field day with this one,LOL.

The glogg sounds amazing. I need a cup with young Henry there...;)
Jen R

Kissing of the Frogs said...

Teresa,
Thanks for coming over to Classic Charm...I really appreciate it. Sorry i missed you.

Yum, I've never tried the glogg, but it sounds very interesting...in a good way that is.
Rose