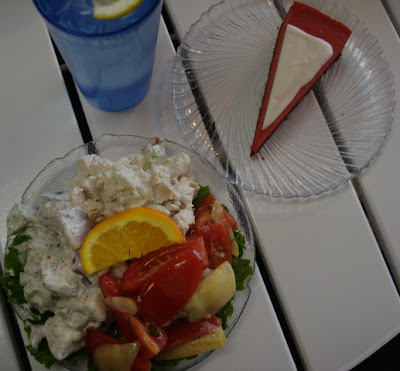 I met my friend Carol at Maxine's yesterday before our Calligraphy class. Maxine's uses very small luncheon plates...so it really looks like lots of food...not that I'm overly picky, but I'd really prefer a larger plate so my food doesn't "touch". Nevertheless, the food was great...chicken salad, red skinned potato salad, and tomato/artichoke salad. That plate to the right...red velvet cheesecake. It had a brownie crust and was just wonderful.

Calligraphy class was pretty much fun. Good student/teacher ratio...it was just the two of us in the class...we mostly worked on pen strokes and almost made it through one alphabet. I love writing with a fountain pen, but hate the way they just stop writing...I picked up a dip pen set and practiced with it last night. My "writing bump" is now lightly stained with amethyst ink.

While practicing, I watched Eastern Promises with Viggo Mortensen. Viggo--pretty handsome; the movie--really too ~~action packed ?violent?~~to watch before bedtime.

One of my most favorite books in recent months is Romantic Home Sewing by Christina Strutt. A while back, I requested a catalog from her shop "Cabbages & Roses" and it arrived yesterday par avion. Over half of the catalog is oversized postcards...the catalog is all loose-leaf, postcards and a set of description cards, packaged in a bifold card holder. So very clever and so very beautiful.

To do, today~~bake Paris Puffins (as described on NotQuiteJuneCleaver's blog), organize tools, get a project kit together to take to Craft Night tomorrow evening, and laundry. Exciting, eh?
at January 23, 2008

Teresa,
We made those muffins in Home Ec back in the 60s. There was even a poster in the Home Ec kitchen reminding us to just stir until blended... it said "Tunnels are for Trains not Muffins". I haven't made them in years, but maybe I will make some tonight. U remember that they are very tender.

Lunch looks healthy and tasty! My daughter is trying to teach herself calligraphy. Apparently there are tutorials online. I had some pens from a few years back when I was trying to learn how to do it.

That lunch looks yummy! I would love to learn calligraphy! How great you are taking classes...
Penny