The only good thing about snow...

The temperature last Thursday was 64 degrees.  Rainy, but still...64 degrees in mid-January.  I'll take it, right?  Around midnight, the rain changed to freezing rain and sleet.  It then turned to snow sometime after daylight.  Fortunately, I pulled my windshield wipers away from the window and tucked them into little plastic bags, just like they featured on Good Morning, America Thursday morning. Also fortunately, I had a full pantry and refrigerator.  Around 8 PM Thursday evening I was notified by group text that the libraries would be closed on Friday...Yay!!  I immediately sent out a text to the employees at my little branch library.  All were happy.  After all, who wants to drive around in snow and ice?  Friday evening was a repeat...the libraries were closed on Saturday.  Our location is never open on Sunday, and Monday was a holiday.  A four day weekend.  The bad news...no one plowed the parking lot of the huge complex where I live.  All told, we had nearly eight inches of snow over two days...then the temperature really dropped and we woke up to actual -2 degrees yesterday.  Snow is messy...ice is messier.  I finally dislodged my car from the parking place late yesterday afternoon, and managed to drive to work today without incident. 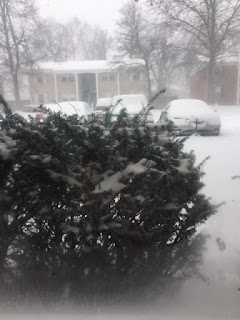 Since I was off, I played around with a few cocktail recipes...the one shown below is a Boulevardier, consisting of bourbon, Campari, and sweet vermouth.  I saw the recipe on Smitten Kitchen's Instagram feed.  Pretty good! A few of my other cocktail creations were a Dark & Stormy, a Negroni, and some plain old red wine.  It's been ages since I've had alcohol, and it was fun experimenting with new to me recipes. 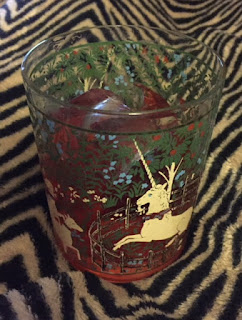 The other thing I enjoyed was having plenty of hot beverages...teas, hot chocolate, and of course, coffee. 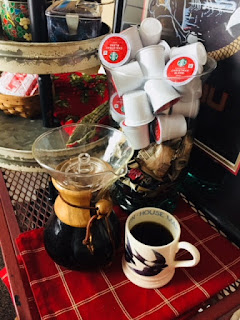 The time off from work was excellent, but it's nice to be back around people...I could turn into such a hermit!
at January 17, 2018