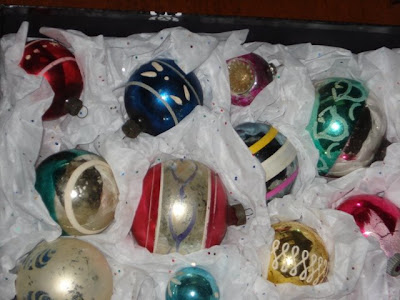 Are you almost always on the same wavelength as your friends? Last Saturday, before we left for our annual outing to New Harmony, my friend Carol and I exchanged birthday presents. When I opened the front door to let her in, I had to chuckle...she had packaged my birthday present in a black with white accented storage box...my present to her was the opposite...white with black accents. We've done this before in clothing; several summers ago we were going to attend a Blues Fest across the river; she dressed in white/black toile capris with a black tshirt and I was in the opposite...black/white toile capris with a white tshirt. Crazy.

My gift from Carol were these beautiful vintage ornaments. Aren't they pretty?

They are so pretty...vintage is always cool.

Yes, I have had those kinds of moments with friends. My sister and I used to do this sort of thing all the time. I'd pick up an item while shopping and go to find her and she'd have the very same thing already in her hand to show me. Weird!

Those type of vintage ornaments always whisk me right back to my childhood! And didn't she wrap them in the vintage wrapping paper with the "sparkly flecks" in them that we used to use back in the day? (I don't know how old you are, so I shouldn't assume... LOL)

How thoughtful of your friend to share those with you!