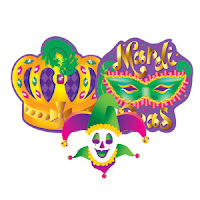 Well, it's 8:30 here, and my mind's buzzing...off to work later in the day, but for now I'd like to maybe accomplish something but I can't quite decide what to work on first...so maybe I'll just keep sitting here drinking coffee (could that have something to do with it??). First thing this morning, I was looking at the calendar...Mardi Gras is just 3 weeks from today. I've never attended the "real deal", but for the past several years a very small group (most times consisting of just 2 of us) have gone to a pretty seedy bar in the not-so-good section of town to hear a really great Zydeco band. There are several performances, and we always hit the early Sunday evening--before Fat Tuesday--"family show." The band is pretty fabulous...we first encountered them at the annual W.C. Handy Blues Fest across the river in Henderson, Kentucky. They play Zydeco Night every year, and 2008 is no exception. They are not playing their usual gig for Mardi Gras in our town this year, so we're just going to have to find something else to do. I tried to post a You-Tube of the band--Chubby Carrier and the Bayou Swamp Band--but couldn't get it right. Zydeco--happy music. Very random...
After I got over my brief moment of disappointment that I would not be going to hear the band in that shabby, very smoky little venue (one of those places you do not wear your coat into for fear that even the drycleaner won't be able to get that smoky smell out), I moved on to what I was going to do next week...sometimes, especially when a Monday holiday is involved, and my work schedule "co-operates" I can "spend" a minimum amount of vacation days to get an entire week off. That's what I'm doing next week...working this entire weekend, and have the remainder of the week off. No really big plans, but I also don't want to fritter away the time as I often do. I'm thinking this would be a great week to finish lots of works in progress---get them out of the way so I can start on new things that have caught my fancy lately.
Masterpiece Theatre---I just really enjoyed Persuasion Sunday evening. As Junie Moon mentioned in her comments the other day, I too scurried around this past weekend to get the chores finished so I could just sit and relax and watch. Everyone I talked to yesterday just said that they had taped or Tivo'd the program and would watch it later. I find that if I tape something, it's highly likely that I won't end up watching it...Masterpiece was my little treat for the weekend.
Think I'll go accomplish something now...
at January 15, 2008

My husband and I love New Orleans and Zydeco--so much fun! I've not ever been to Mardi Gras although my husband marched in their parade when he attended The Citadel. It's a little too crazy during Mardi Gras for me.